I previously wrote Part I in this short series describing my first course here at UCSD, specifically focusing on three things than went well…and three that went er not so well. Now, as I sit in the time period after having submitted final grades but before having access to student evaluations, I wanted to take a few minutes to draft a few posts using the data I collected from students throughout the course to tell a short story about what they, en masse, thought of the course.

For privacy reasons, none of the data I use are going to be identifiable or individual-level, but I wanted to at least share the sources of the data I collected from the 326 students in the course:

Aside from grades, you’ll note that I don’t have data from everyone across every piece of information collected. Such is life in data collection in the classroom.

There are tons of questions that can be asked of these data, but I’m just going to focus on three for this post:

The reason I did this is simply because this is an introductory course with students from varied backgrounds and I didn’t really know what to expect, nor did I have any idea of whether or not this would change over the course of the quarter.

While this is self-reported, that’s really what I was interested in. Have students seen this information before or are they learning new stuff? 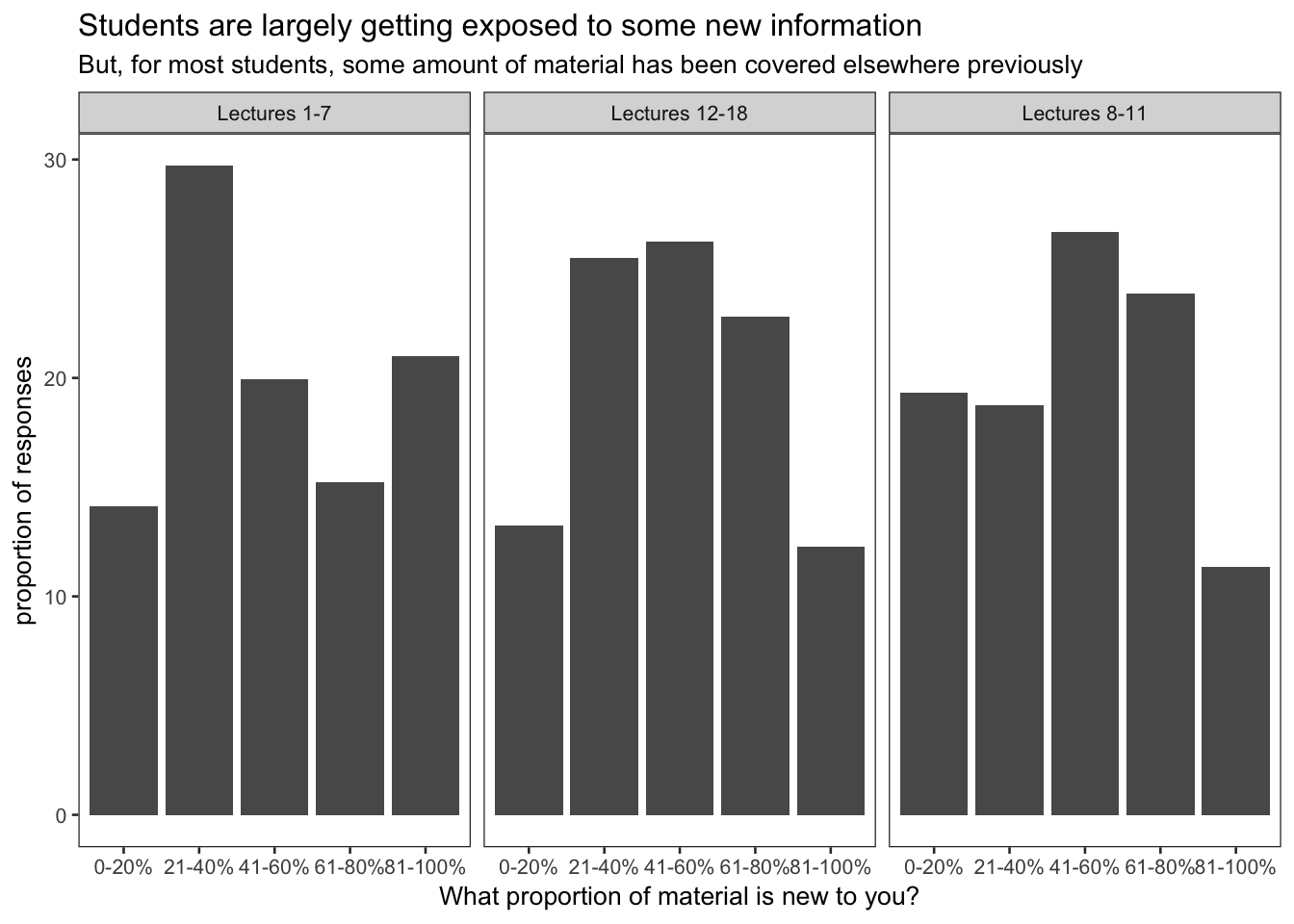 This first panel shows that overall during the first third of the class (ethics, data, and data wrangling), most people learned something new in the material covered, but a lot of people had seen a fair amount of the material before. This felt right for an intro class, but I don’t really have much to compare it with. For the second third (data visualization, descriptive and exploratory data analysis), most people were somewhere in the middle - it wasn’t all new but they had seen a fair amount of it before. The final third (inference, machine learning, geospatial analysis, and text analysis) had most people having been exposed to some material before, with fewer having the vast majority of the material be new.

Shift in proportion over course 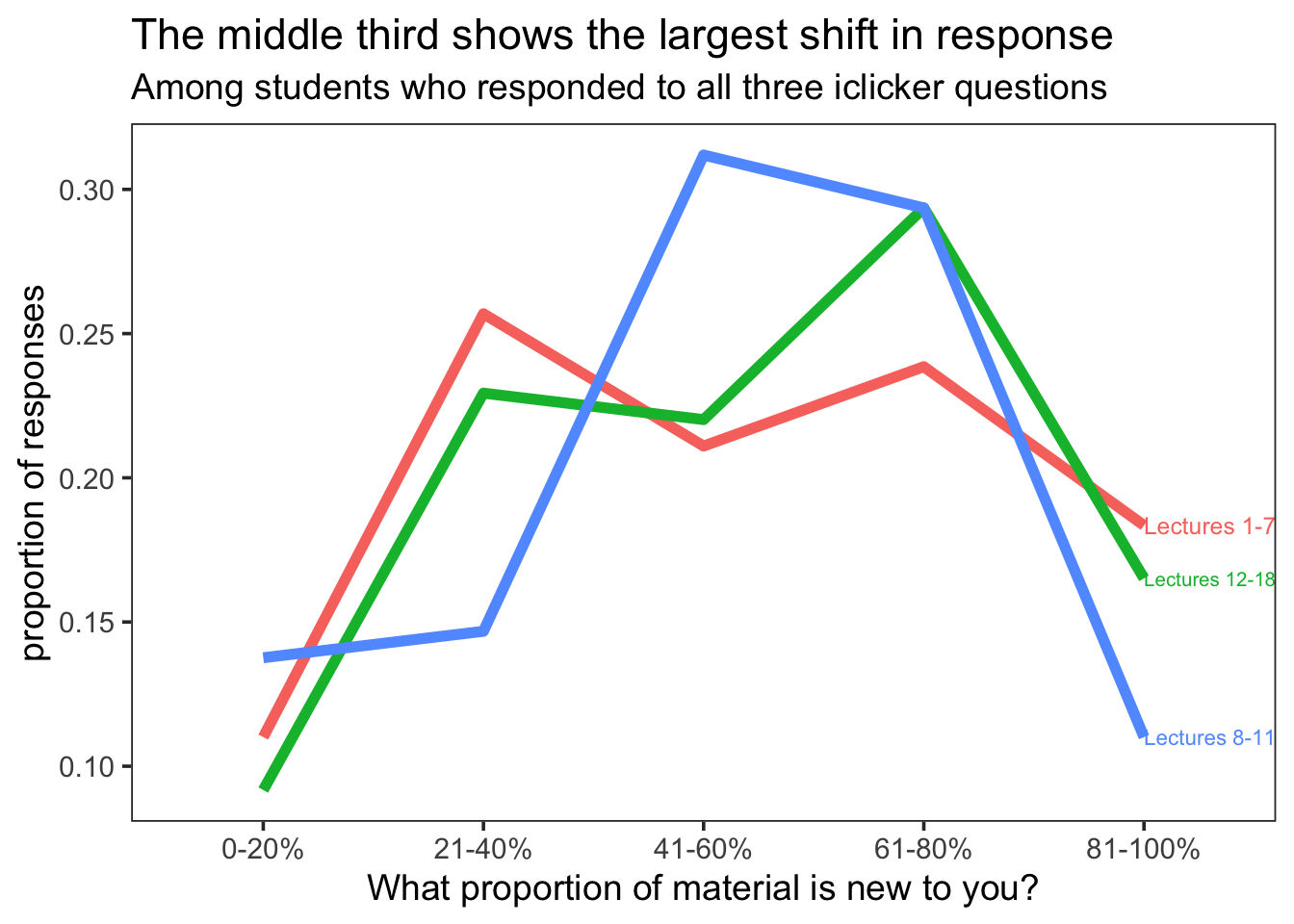 We see that the proportion of responses shows the largest shift in the 41-60% bin for the middle third of the course (data visualization and EDA focused lectures). The first and last third of the course have a fairly consistent pattern. I did look to see if individual responses stayed consistent, and while I’m not showing the data here because that starts to get at individual level data, what I’ll say is that there were all types of people. Some who responded consistently that the same proportion of material is new and many who changed responses over the course of the quarter. What was not seen frequently (as one may expect) were shifts from one extreme to the other. Very few people went from 0-20% of the material being new in one third of the course to 81-100% of the material being new in another third of the course. (Also, I don’t love this visualization so if someone has a suggestion for how to display this information better, let me know- I’d love to hear suggestions.)

If students are learning new material, what are they learning. I asked students in the pre- and post- course surveys to answer the following: “Which of the following topics are you familiar with? (Here, familiar means you could explain the topic clearly to a friend without Googling it first.) Check all that apply.” Most topics were topics we would cover in the course, but I threw in a few controls - topics that are related to data science but that we weren’t going to cover in this course. Those “controls” are highlighted in red below. 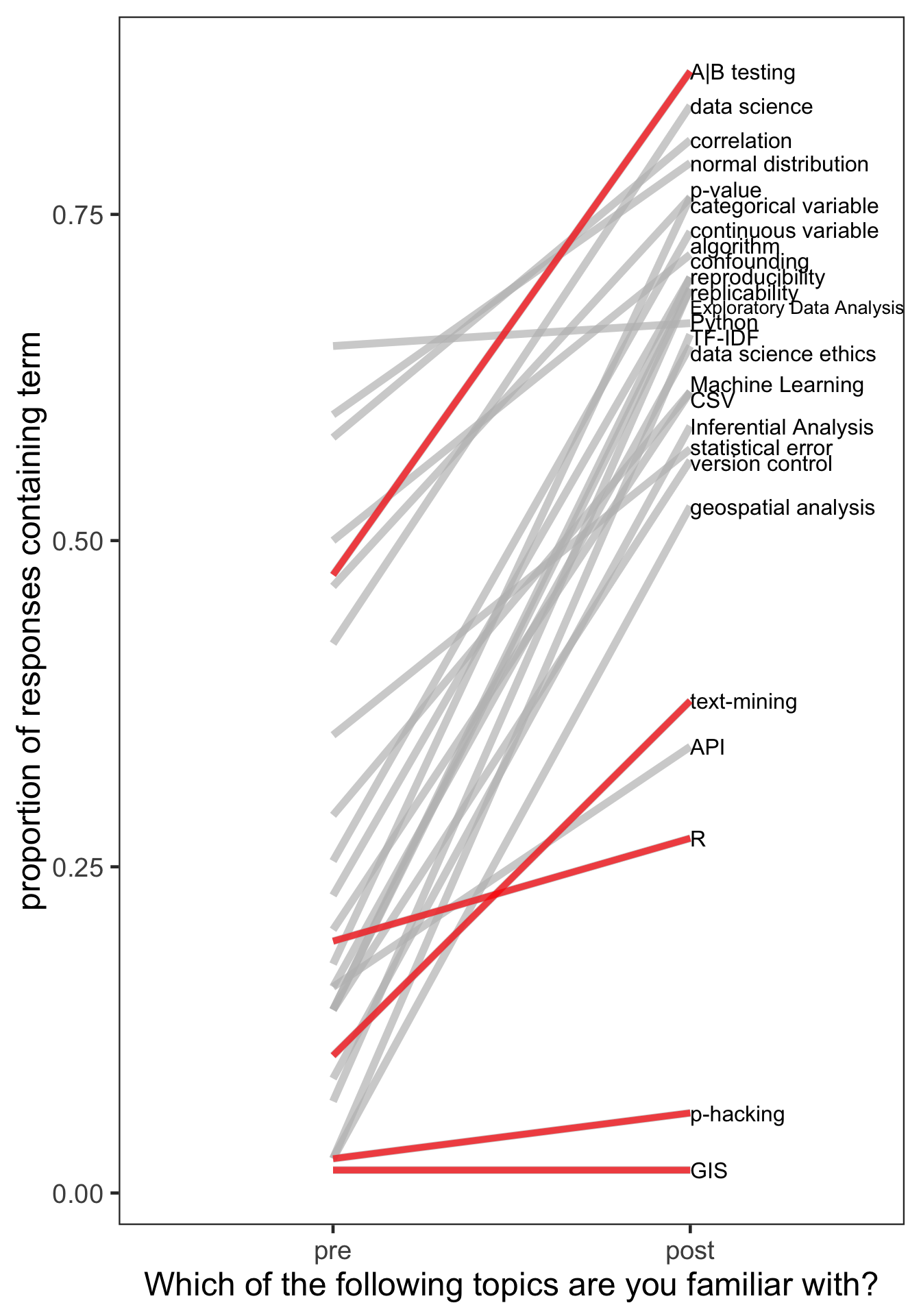 Overall, students felt more familiar with topics covered at the end of the course, which is great to see (at a bare minimum). I’ll note that while A|B testing was planned to be covered in COGS9, an example of A|B testing was explained by one of our guest speakers. We then reviewed the following lecture what our guest lecturer spoke about. So, students were exposed to A|B testing, and I kind of love that students feel they have a grasp on it now!

As for text mining and R, we didn’t cover those in detail, although the discussion of what R is relative to Python and data science was touched on. I didn’t mention the words “p-hacking” or “GIS” at all in the course…although, I probably should cover p-hacking in the future.

The final two topics I want to mention are “Python”…a rather flat line, and “API”, a line showing that most people don’t have an understanding despite it having been covered. For Python, we used Python in the course but only minimally to wrangle a dataset and create basic visualizations. If you already know Python, this is pretty simple. And, if you didn’t, you could totally pass the class without mastering this. So, the fact that this didn’t change over the course of the quarter is pretty understandable. It also demonstrates that COGS9 is a weird course where more than half of students program and the other half do not. As for API, this may have been the topic I did the worst job explaining during lecture. It felt bad after the lecture. And, their exams demonstrated that they didn’t get it. So, this line makes sense to me. Something to improve for the future!

I have an attendance policy where students are not penalized for skipping lecture, but I offer extra credit if students attend at least 75% of the lectures (measured by iclicker response). I was really curious to see if students who attend lecture tend to do better in the course. Further, I was most interested in those students who don’t like to come to lecture but came for the extra credit. Below I’ve plotted the number of points students received (without the extra credit) broken down by their self reported feelings toward lecture attendance. Data are included for the 148 students who responded to the attendance question on the post-course survey. 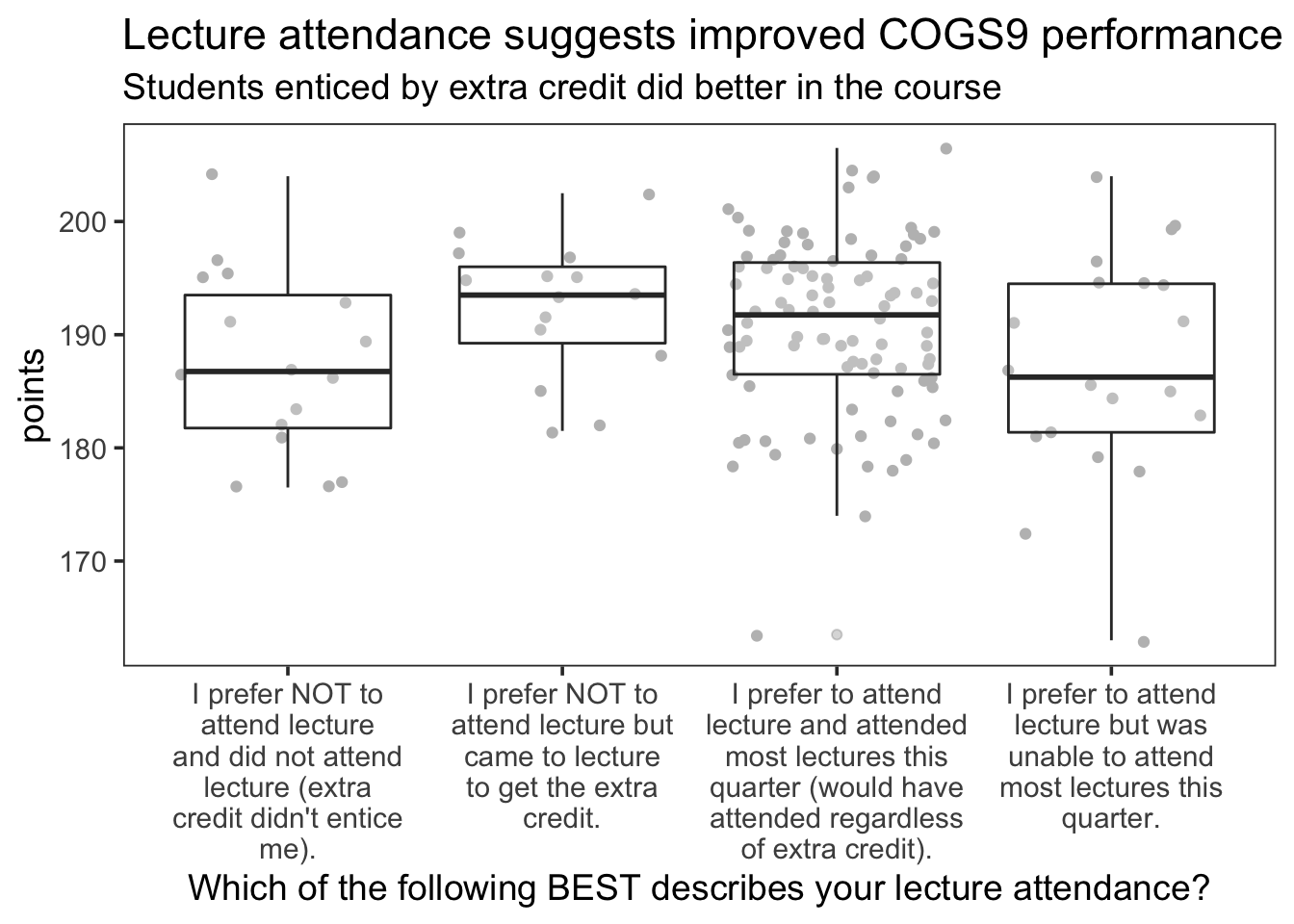 Here, we do see that those who attended lecture do better in the course overall. This convinces me to keep this attendance policy for the coming quarter.