Let me start off by acknowledging that we are by no means the first people to ask which color palettes are best for graphing. Further, I fully admit that we entered into this quickly and did not read the literature thoroughly nor think through all the possibilities that one should consider when embarking upon a proper research project. Which, to be fair, is why this is a blog post (and not a paper).

Jeff and I probably aren’t even the first mentor and mentee to have the following discussion:

Shannon: Well, and this is not a sexist comment, males don’t differentiate colors as well as females.
Jeff: What? Yes, that is sexist!
Shannon: No, it’s not. It’s a thing.
Jeff: Are you sure?
Shannon: I think so…
Jeff: Let’s test it.

With that, the desires to (1) develop a “Leek Group” color palette and plotting style and (2) determine whether or not males and females discriminate colors equally well were born. And, so, we asked the internet to take a quiz.

To remind those who took the quiz and catch the rest of you who didn’t up to speed, these were the color palettes being considered: 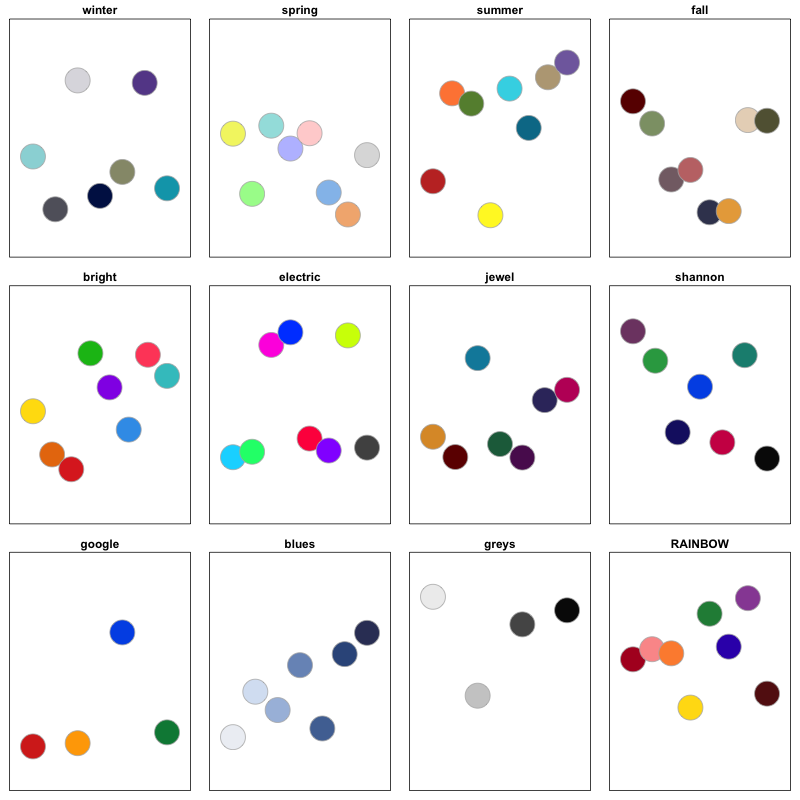 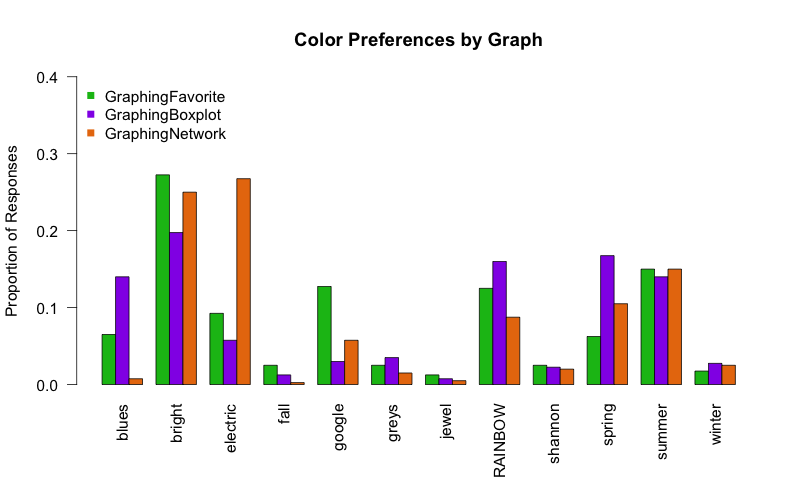 There was no overwhelmingly popular winner; however, the “bright” palette was preferred by the largest proportion of people for graphing generally (green above) and preferred by many when specifically applied to the boxplot (purple) and network (orange) figures presented. In group meeting this past week, it was suggested that the pink be “more pink,” and I thought that was a great suggestion, so, without further adieu, the Leek Group color palette will be “bright” (with slight pink adjustments):

As for the other plotting details for Leek Group graphs, you’ll just have to wait on the edge of your seats and see what Sean comes up with!

First, when asked to select palettes in which all the colors included did not appear distinct at first glance, 25% of females and only 8.7% of males responded that all of the palettes appeared reasonably distinct (p<5e-05). Yes! Point Shannon.

However, when presented with three images of blue dots (above) and asked the correct number of distinct colors in each image, we got the following results:

Note: the actual number of distinct colors is 5, 7, and 7 respectively.

As evident in the graphs above, when determining the number of distinct colors, there is no large difference between the sexes. But, I will break these results down anyway. In the middle plot, there is a tendency for females to get the correct answer (7) more often than men. However, this effect is attenuated in graph to the right in which more males see the correct number of distinct colors (7) and more females see more distinct colors than are actually there (8 and 9…¯\_(ツ)_/¯?). I guess I have to concede to Jeff. Here, there was no strong effect for color discrimination between males and females. Point Jeff.

Finally, while not about color discrimination, we did see sex preferences when broken down by color palette. Specifically, females showed the strongest preference (relative to males) for “bright”, “electric”, and “google” to males. Males, on the other hand had a preference for “spring” and “summer” relative to females.

A few remaining points to be made