The Chronicle is focusing on sexual harassment in higher education, and we'd like to hear from you. Do you have a story to share? There are a few ways to contact us, and you can do so anonymously: https://t.co/wsOMkJLmAf

In addition to hearing victim’s stories, as a data scientist, I personally wanted data to get an idea of just how wide-spread sexual harassment is in the academic world. As such, I am indebted to Dr. Karen Kelsky, for writing the survey used to accumulate the data for this analysis. Here, I have included a first-pass analysis of this survey response data on “Sexual Harassment in the Academy”. The impetus for this survey was discussed by its author, Karen Kelsky, Ph.D. in the form of a blog post on TheProfessorIsIn.com on December 1st, 2017. The data analyzed here includes all responses to the survey entered before 12:40 EST on December 11th, 2017. Code for analysis and plots can be found on GitHub. 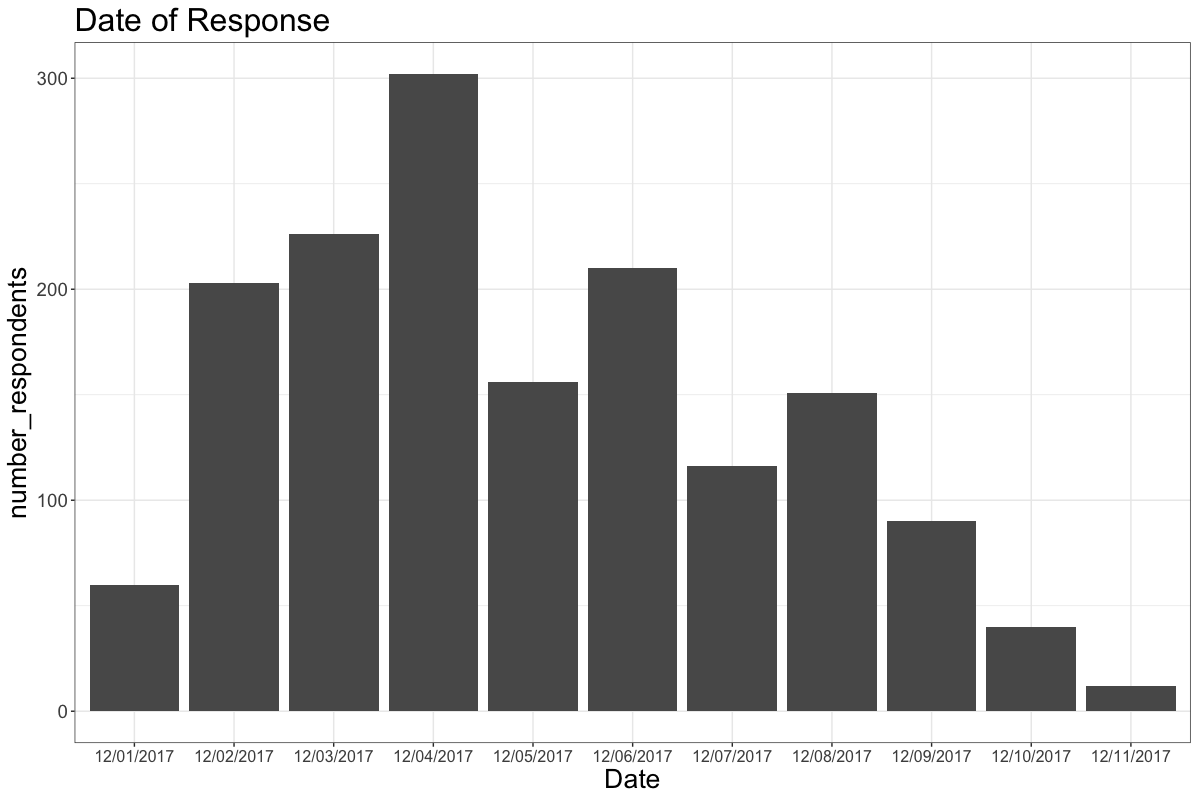 What Was the Gender of the Harasser? 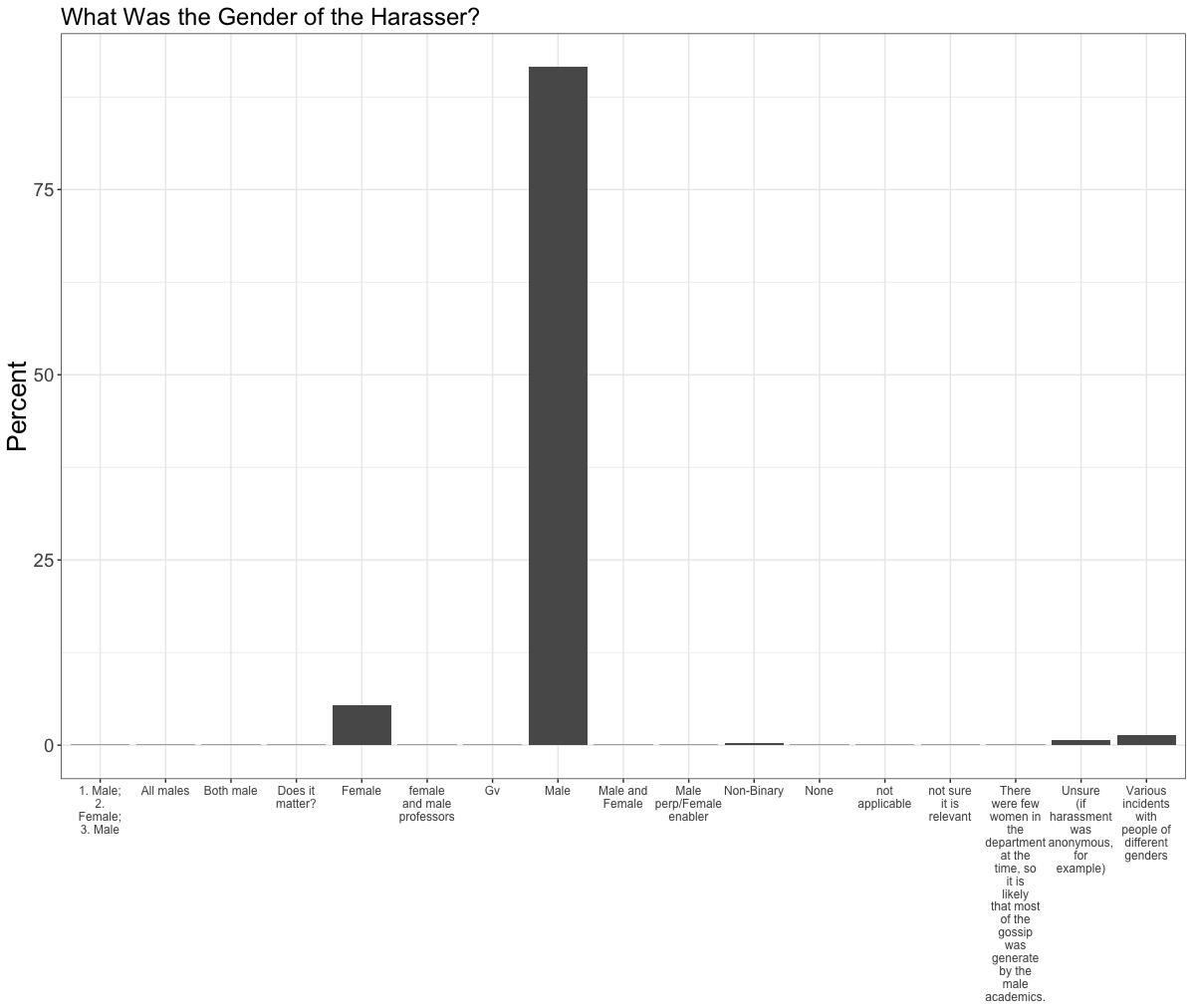 What Was Your Status When the Incident(s) Happened?

In response to the question “What Was Your Status When the Incident(s) Happened?”, there were 857 unique responses. I cleaned up these responses by combining similar responses with different capitalizationsor abbreviations and found the three most frequent responses were “graduate student”,“phd stduent”, and “undergraduate student.”

Since this does not include everyone, I have attempted to categorize these these responses at a higher level. Here I have combined responses to consider only four categories: students, professors, instructors, and other. 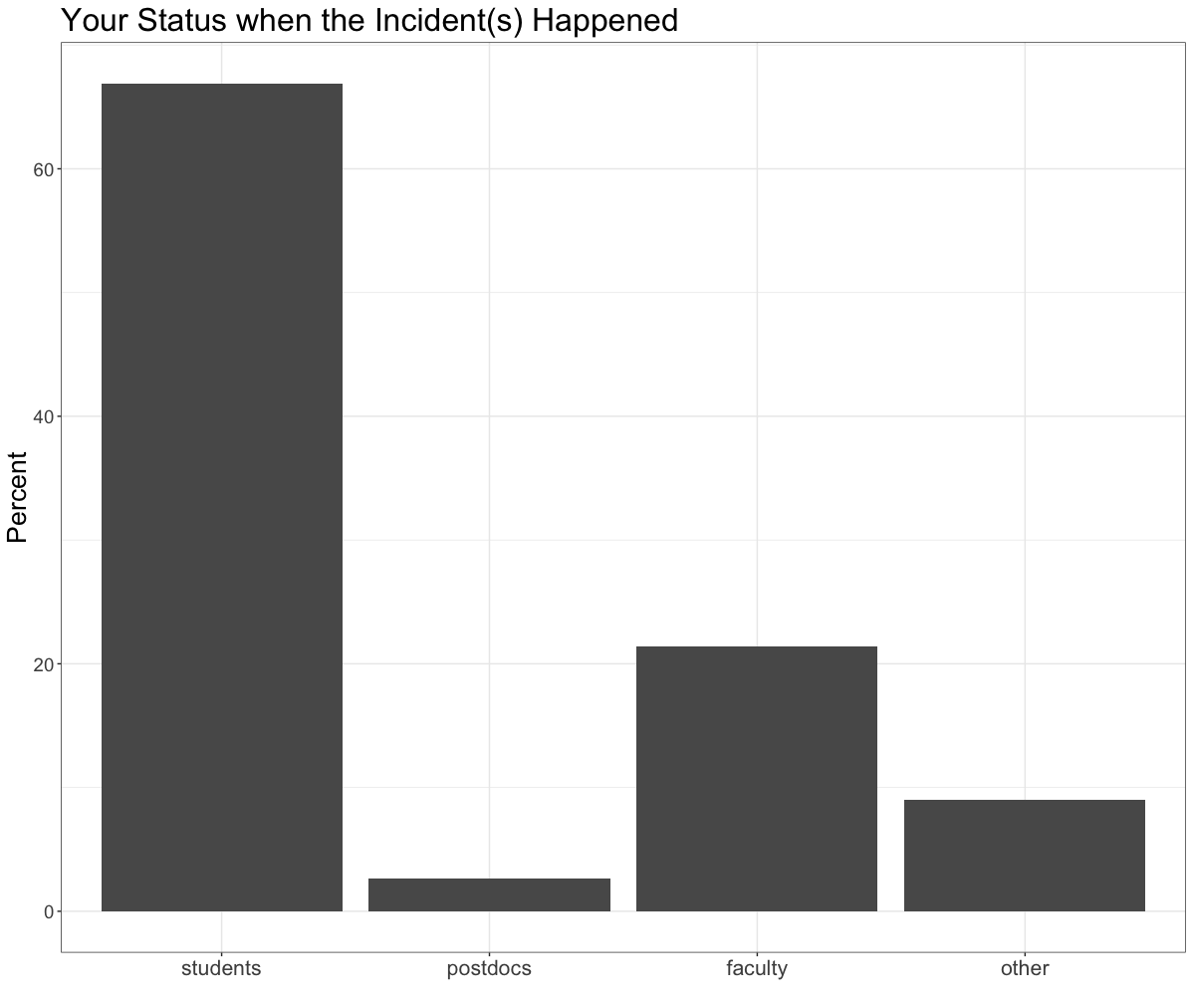 Here we see that survey participants were most frequently students when the incident(s) happened. (Note: postdocs do not exist in every field. Their small number likely reflects this fact in both this graph and the graph below.)

What Was the Status of the Perpetrator(s)…Particularly relative to you?

Summarizing these data into the same four categories, it becomes quite clear that the harasser is most frequently an individual in a position of power. 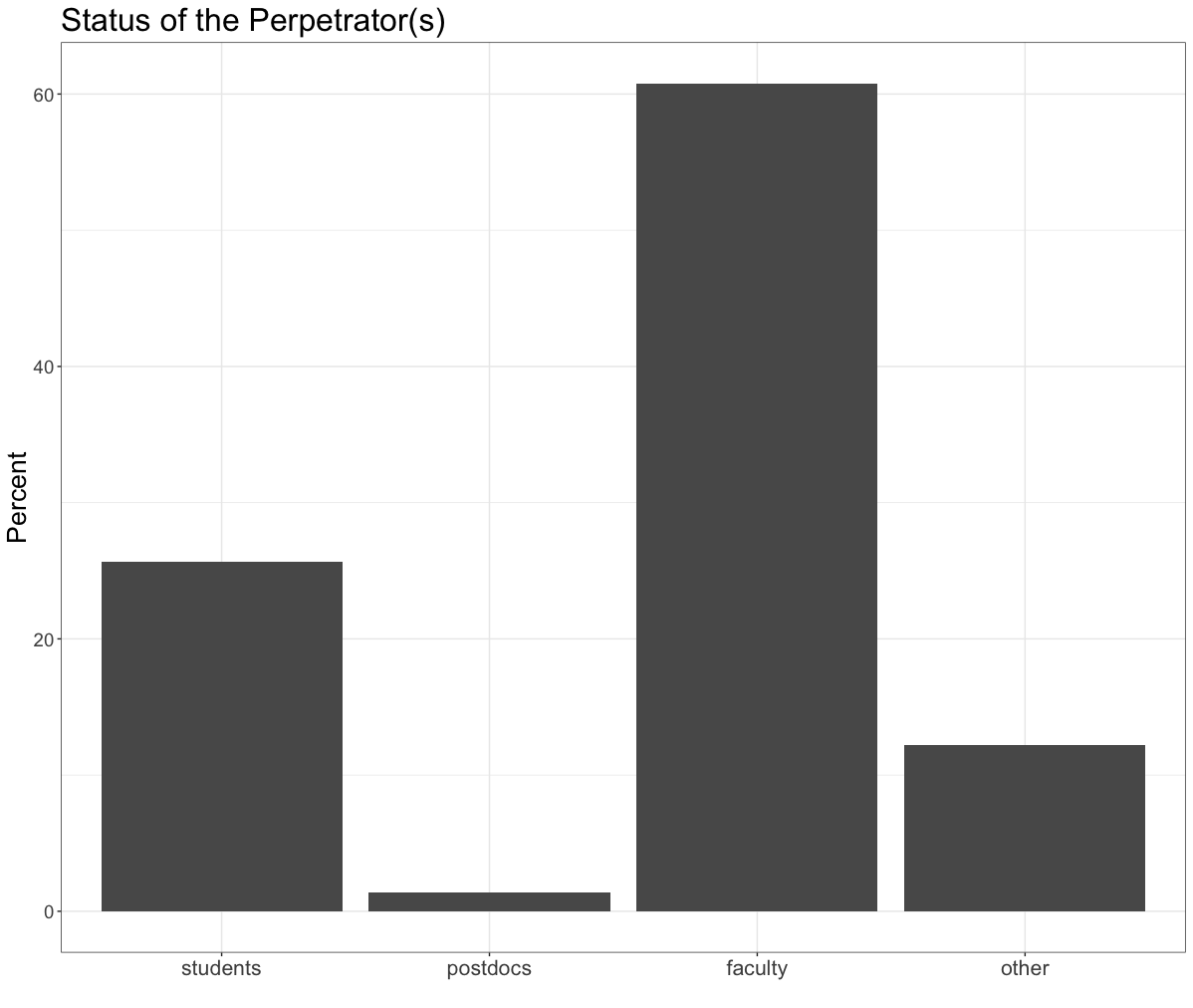 What Type of Institution Was It?

When reporting the type of institution, survey participants reported experiencing sexual harassment at all types of institutions. While we could focus on the relative values, I’ll note that there are not the same numbers of institutions/agencies in each category. Further, there is likely some selection bias in those who have responded to the survey. For these two reasons, raw numbers likely don’t tell the whole story. However, what we can conclude from these data is sexual harassment occurs across the board. 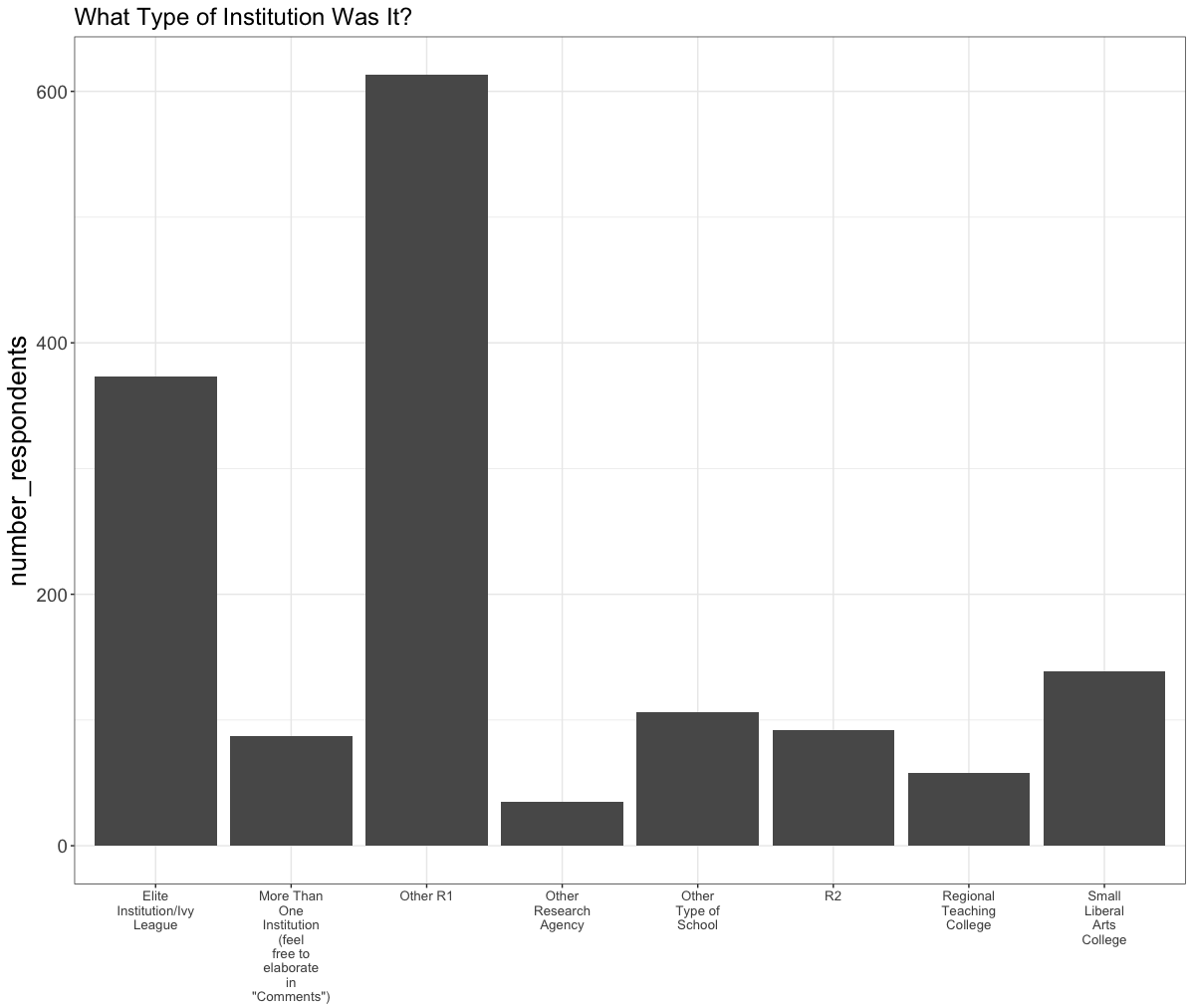 Institutional Responses to the Harassment…If any?

There are 1,004 unique responses to this question, with at least 202 respondents reporting that nothing was done in response by their institution. This is unacceptable, and we must do better. In addition, there are at least 93 responses who did not report the harassment. I applaud these indivduals for sharing now. (To those who have shared here for the first time, you don’t owe your story to anyone, but I appreciate your strength in sharing now. Thank you.) Three reported their report led to a Title IX invesitation. Three were not sure of the response. The remaining 982 responses are full of heart-wrenching stories. Take a look through the responses. Individual stories matter.

Survey participants came from 463 unique fields. Participants most frequently reported to be in the fields of ‘english’, ‘history’, and ‘sociology’. However, as noted above, there is likely selection bias of participants. Rather than focusing in on any one field, the conclusion to draw here is that people are from many different fields.

Update (Dec 14th, 2017 at 9:36PM EST): Given Kristian Lum’s recent piece ‘Statistics, we have a problem’, I wanted to quickly update this post. As of today, there are 1,747 responses. 206 of these responses mention the word “conference” in either their response to “What Happened and When?” or “Other Comments you’d like to add.” 11.8% of responses mention conferences.

As with all analyses, there are limitations to the interpretation of these data. As mentioned in the post, there is selection bias in who responded to the survey. Participants likely do not perfectly represent academia. While not limited to individuals who follow Dr. Kelsky’s blog, her readership likely influences who participated in this survey. Thus, while we cannot interpret these data to conclude in which field sexual harassment is most frequent, we can conclude that sexual harassment is wide-spread across many fields and read the stories of the participants who participated. Additionally, I pulled these data while the survey was still running. Values will likely change over time as a result. Finally, these are self-reported data, which have not been independently verified.

This is Part 1 of my analysis of these data. I plan to analyze people’s stories and free text responses in more detail than I would have been able to do so sufficiently for a first blog post. If someone else beats me to this, awesome. The faster we are able to help victims of sexual harassment and understand how widespread this is in academia, the better.